Møller Bil Motorsport started the season in the German VLN endurance championship with a stunning victory at the Nürburgring Nordschleife Saturday.

Yes!!! What a wonderful feeling it was to win the tough SP3T class for cars with two-liter turbo engines on Saturday. We have been fighting for this for a long, long time and finally it was our turn. It was much needed and it feels very deserving, to be quite honest.

Also, we won because we were the best. We had pole position, and controlled most of the race. In retrospect, the congratulations poured in with SMS messages, messages on social media, phones and I thank them all. And I also owe my team, Møller Bil Motorsport and all our partners both in Norway and Germany, a big thank you. Long distance racing is a team sport, and this weekend everyone did a fantastic job!

Remember that we have guest mechanics that have never been mechanics in a race before, and still we win a class that I would say is on a very high level in international racing! It says a lot about how good the mechanics of Møller Bil are. The car was also perfectly prepared by Raeder Motorsport.

For my own part, it was great to win on Saturday. I have won many races in my career, but Saturday’s victory I rate among the very best.

PREPARATION:
I have prepared myself well lately, and I have worked with a concrete plan for many years how to develop myself as a driver. But even though I knew I was well prepared, there is always a lot of uncertainty ahead of the first race of the season in terms of whether the car is competitive against the competitors.

Initially, we were prepared that we were not going to fight all the way to the top because we have been quite careful to upgrade the car too much in the winter. We have chosen more secure solutions to be able to finish the races without too much trouble, and we anticipated that we would not be among the fastest in the spring, but that we would have the chance to develop the car more later.

During testing last weekend I got the impression, however, that we had pretty good speed after all, and I was very satisfied with my own driving. 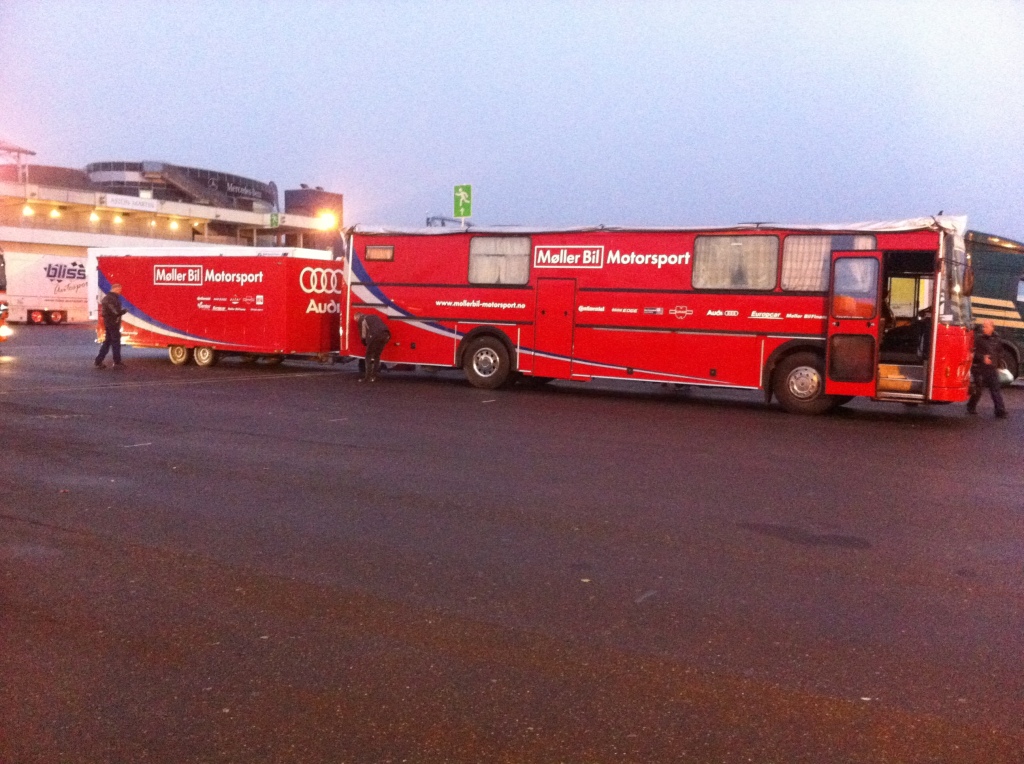 QUALIFYING:
The pace was confirmed during qualifying on Saturday. For the first time I got to try the fastest tires, and I tried to learn those on the first lap. The traffic was normal with some relatively simple overtakings that I did not lose too much time on, but this would change when I came up the hill from Bergwerk.

In front of me I suddenly had two slower cars that were side by side. They would not let me past and I had to brake and downshift from fifth to fourth. I finally passed, but was afraid that the lap was ruined.

It was the apparently not, because when I crossed the finish line I was told that the time was 8:38! I was a little surprised considering the traffic problems, but at the same time, I’ve had a feeling last week that I could be capable of driving faster than anyone previously has done in this class.

Now there was indeed no record since the time was two seconds slower than the lap record set by Christoph Breuer from last year, but who knows how much I lost due to the traffic problems up from Bergwerk? And actually it is pretty amazing considering that our car is weighing 50 kg more than last year due to changes in regulations.

I was, naturally enough, ready to drive even faster on my second lap, but it was ruined by a double yellow, and after that we decided to go into the pits. Luckily, my first lap was good enough for pole position, just three tenths ahead of my former team mate Christian Krognes, who also did a very good job.

It was also good to see my team mate Kenneth Østvold, who had an impressive lap time of 8.43 with a set of harder tires than me, and also Håkon Schjærin was faster than ever before. 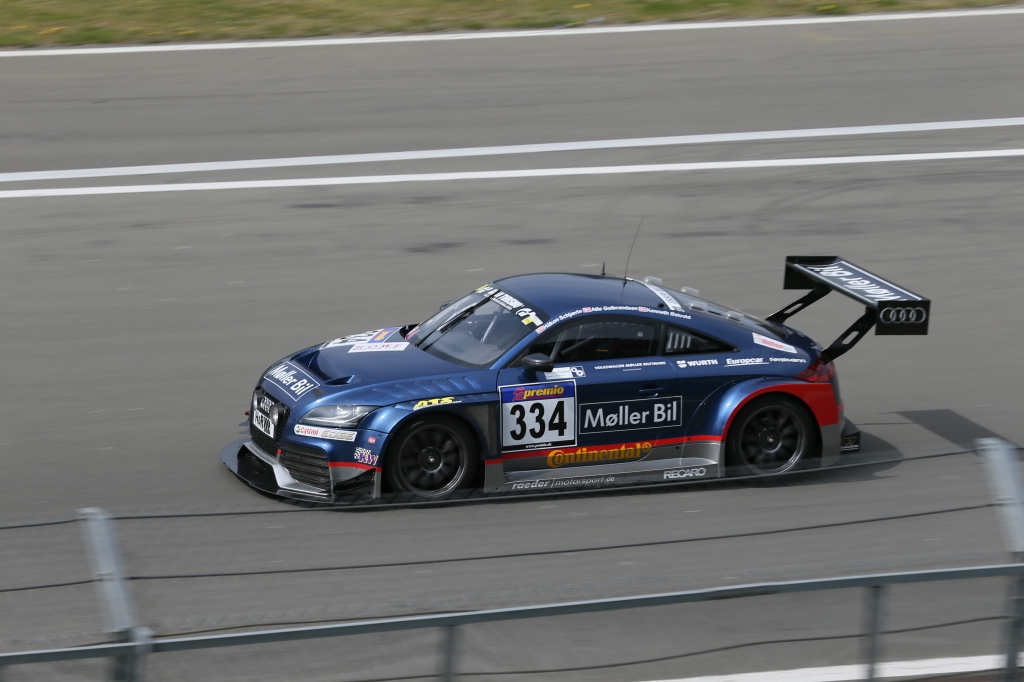 RACE:
I was the one starting this time, and although I’ve started a few times before, I’ve never started a VLN race from pole position. From other championships I have learned that whoever has the pole position is the one that controls the pace of the warm-up lap, and that no one can pass the pole-sitter before the red light goes out. This was also said during Friday’s briefings.

So when I came out on the main straight, and still with red lights, I was shocked when the cars around me suddenly gave full throttle and passed me. In accordance with the regulations, my impression is that many had a jump start, and before I realized what had happened I was pretty far behind.

However, there was no one who was convicted for the jump start, and in retrospect, I have heard that this is how you start in the VLN…

Luckily I had a pretty good first turn and got out in fourth place. I passed a Scirocco on the Grand Prix circuit and was up third – behind our sister-car from Raeder Motorsport and LMS’s car number 303.

Eventually I got past the sister-car, but it was hard to come by car 303. I had no chance on the straights, and I was struggling with massive understeer in the corners. But eventually I got by in a corner, and then I drove away from the rest of the field and had a pretty good lead before our first pit stop.

Overall, I lost quite a bit on the messy start, but on the other hand, I got to show that it is possible to get past the competition even if you’re not ahead in the start.

After a fantastic pit stop by our mechanics, it was Håkon’s turn to drive. Håkon had a good stint and increased our lead. Finally, it was Kenneth’s turn, and he could take it easy to save fuel. He was also unlucky with a couple of double yellows, but we were in control all the time.

Behind us was a close battle for second place, and it was Christian Krognes and his team that won that fight after some very good laps by Christian.

CELEBRATION:
We cheered as wild as the win was in the bag, but it was also an exhausting experience. I was so nervous the last laps Kenneth drove, but hoped that luck would finally favor us. And it did after many years with a lot of bad luck.

We have fought for this win for a long time, but I have never doubted that it would be possible to fight back. Deep down I knew that if we did our best we could manage to beat anyone, and we proved that on Saturday.

It is fun to see that the victory has been noticed in the media. There have been articles about Møller Bil Motorsport in newspapers across the country the recent days, and we have received media coverage with an ad value of over 1 100 000 NOK after Saturday’s victory. 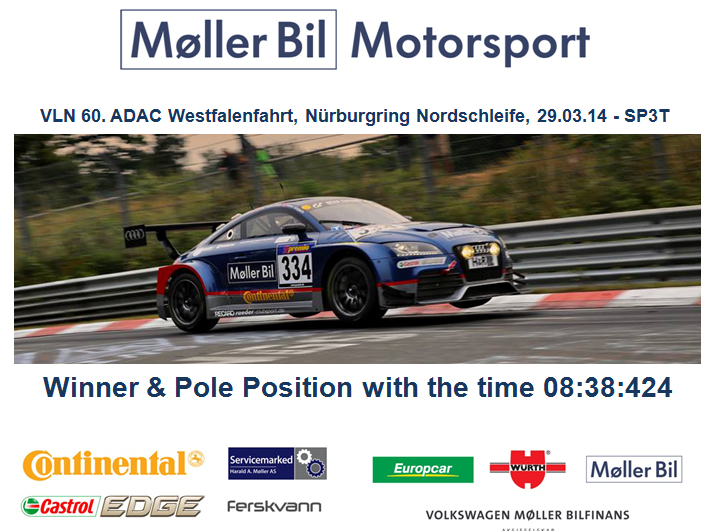 We will not run the next VLN race, but we’re back at the Nürburgring April 26th. Considering all the positive things that happened this weekend, I think we should be even faster then!