We had to retire with a broken gear box while leading the race on Saturday. And it was drama before the retirement also.

Saturday Møller Bil Motorsport was back at the Nürburgring Nordschleife for the penultimate VLN race of the season. It was cold, and actually snow around the track when we arrived on Thursday. 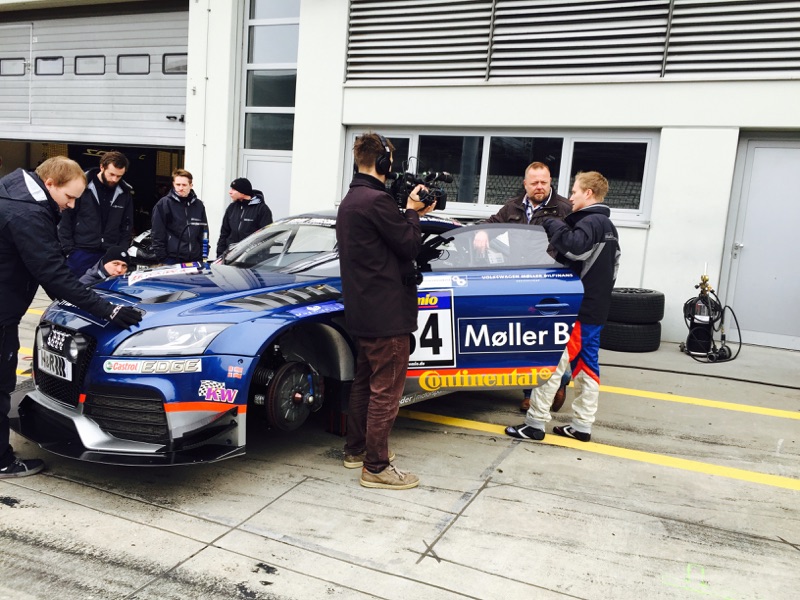 Friday I met a TV crew from the Norwegian TV program “Garasjen” on Viasat4. They have met me earlier when I was commentating Formula 1 on Viasat Motor, and now they were following me and Møller Bil Motorsport a weekend in Germany. I also took the host, Asgeir Borgemoen, for a lap in our Audi TT around the track during practice. The result will be shown on Norwegian TV some time this winter.

Saturday we were ready for qualifying, and I was first out as usual. But this time it was not possible to set any good times early because of a damp track, and even two double-yellows. So I aborted my run, to give my team mates more time to set some good lap times. Kenneth drove a fast lap, but our competitor in the five cylinder 303 car was a bit faster.

I started the race from second position in the SP3T-class, but third in starting group two. A Porsche from the H4-class was starting in front of me, and this fast car also took the start. But in the first corner it was a double yellow, and it seemed like the driver of the Porsche didn’t see the green flag, and the 303 Audi TT got into the lead. I was not able to pass the Porsche, and this would prove to be a problem the rest of the stint.

You can see the start here:

This was extremely frustrating, and I could see that the leading car was getting a bigger and bigger gap. I felt that I had the speed to follow, and maybe overtake the leading car in our class, but instead I was loosing time on every lap because of the Porsche driver, who just didn’t understand what multi-class racing is all about.

Here you can see an example of how it was for nine (!) laps:

The Porsche driver and I are not competitors. We drive in two different classes, and it was obvious that he held me up lap after lap. His job is then to let me pass, so that I could fight against my competitor in SP3T. Then he could have driven faster also, because then he wouldn’t have needed to block me.

After a few laps a guy from our team went over to the Porsche-team and asked them to tell the driver to let me pass. But still nothing happened. The result was that I was stuck behind this car for 9 laps and 220 kilometers. In my eleven seasons in the VLN I have never experienced something similar. After my stint I found the driver in his garage and told him what I meant about his driving, and I hope he will never do something like this again.

I also had a scare on lap two. I was right behind the Porsche, and we came down the hill at Pflanzgarten 2 in 197 km/h. Suddenly I saw the flag post with a yellow flag at the bottom of the hill, and I hit the brakes. The first thing I saw was a big slide from the Porsche in front of me because of oil on the track, and the next thing I saw was the barriers. With full opposite lock I avoided the barrier, but the result was a 360 and I stopped in the middle of the track…

Luckily I could continue, but I lost some seconds on this. On the next lap I was ten seconds faster than the Porsche, and again I was stuck behind this car…

Luckily I didn’t loose to much time to the leading car, and after a perfect pit stop by our mechanics, my team mate Håkon was just seconds behind the leading car when he went out for the second stint. After some impressive driving Håkon was able to take over the lead, and we were on our way to our first victory since April.

The 303 car then got some technical problems and had to retire, but unfortunately the same thing happened to us a few laps later when the gear box broke.

This was of course a big dissapointment on a day where we were in the lead and had the speed to win, but technical problems is a part of racing. And we have had extremely few technical problems with this car, and the job by both our Møller Bil mechanics and our technical partner Raeder Motorsport have been fantastic.

So it’s just one thing to do; strike back in the VLN-final in two weeks!