Spring is here, and the racing season has started with a pre season test at the Nürburgring.

There haven’t been a lot to tell since the news about Møller Bil Motorsport‘s continued presence in the VLN was released in December. The winter in Norway has been cold as usual, and I have spent as much time as possible with my family. It’s a cliché, but family is everything.

There has also been a lot of work, especially in my communications agency, Ribalta, and now the F1-season with my commentating on Viasat Motor also has begun. Other than that I have been preparing for the new racing season the usual way with physical and mental training, and some ice driving here in Norway.

On Friday and Saturday it was time for the annual pre-season test. I was only present on Friday due to a clash with my F1-commitments. I have combined my semi-proffesional racing career with my F1-announcing for many years, and I will still do that. Earlier I have had some F1-weekends off to go racing or just to have some more time with my family, but this year I plan to do all F1-races. There will however be some weekends where I can’t commentate the practice and qualifying on Friday’s and Saturday’s, but luckily all the VLN races are on Saturday’s, so I will always be able to do the race-commentary on Sunday’s. 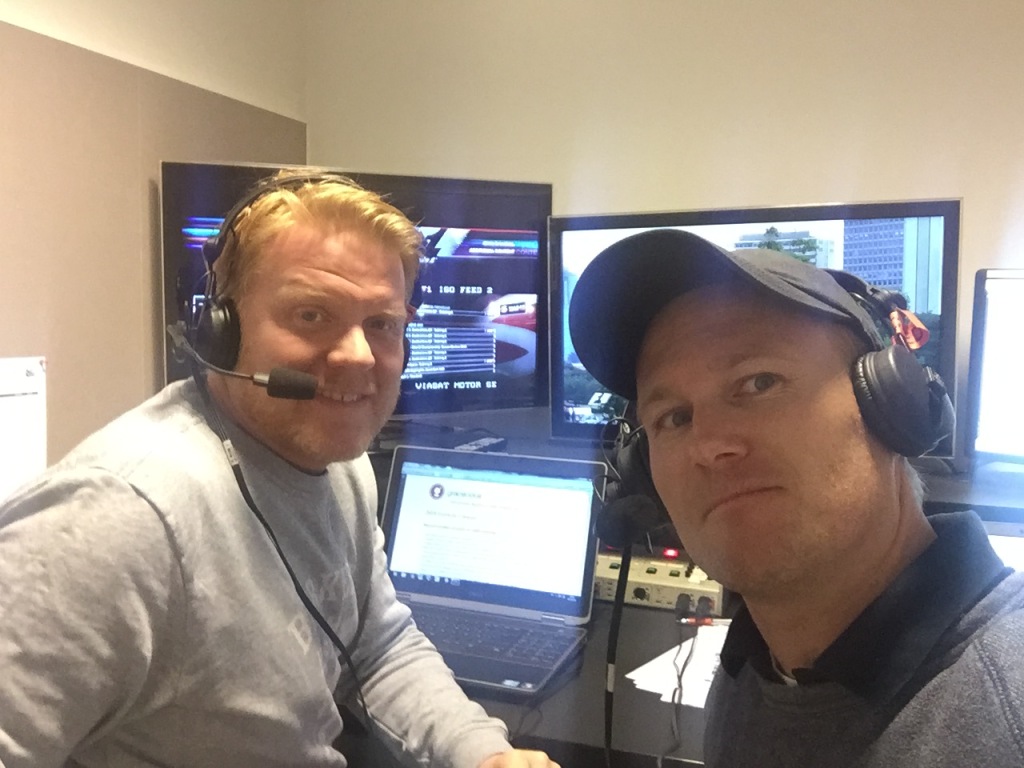 The VLN-test collided with the F1-opening in Australia (as usual), and since I’m the lead-commentator it’s important that I do the first broadcast of the year (the first free practice), and also the first qualifying of the year. Therefore I had quite a hectic weekend this time around.

After some hours of sleep I was up very early Friday morning to commentate the first F1-practice from Australia together with my colleague Thomas Schie. Then I went straight to the airport, while Thomas did the second practice alone. I flew to Frankfurt, drove to the Nürburgring, had around eight hours there, and then went home again – just in time for the third free practice and qualifying from Australia. I was pretty tired Saturday morning after a “32 hour race”, with just a few hours of sleep on the plane.

This season is actually my 20th season commentating F1 on Norwegian TV. I have found and digitized some old footage from my broadcasting career lately, and shared it on my Facebook-page. Fun to see that almost 7000 have watched it already, but everyone aren’t on Facebook, so I have posted it on Youtube also:

Luckily the test was very good. We were just driving on the Grand Prix-track, and it felt great to be behind the wheel of the Møller Bil Motorsport Audi TT again. I got many laps, and tried out some new settings that worked very well. Most of my laps were in the 02:05’s with really worn tires, and I think that’s ok on the GP-track. We haven’t really tested on this layout before, so we didn’t have any reference times.

The rest of the team tested on the Nordschleife on Saturday, and everything worked very well. So now we are ready for our first VLN race of the year, April 30th.

We are optimistic before this season. We don’t know too much about our competitors yet, but I think we will do just fine. I think this will be a very good season.

But now, some more skiing in the Norwegian mountains, before it’s time for some more racing!